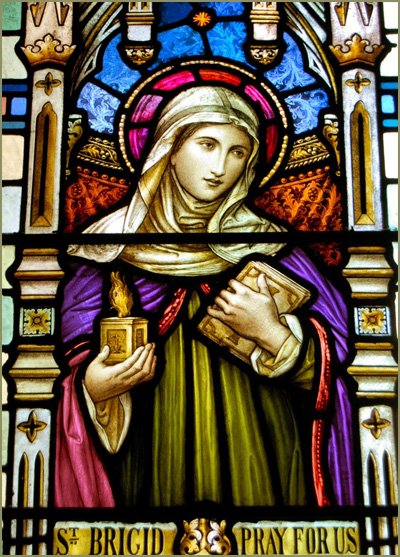 Who Was St. Brigid?

The Feast of St. Brigid is upon us—February 1 to be exact. But what do you know about this patron saint of Ireland? Follow along as we take a closer look at her life.

When and where did she live?

St. Brigid was born in the middle of the 5th century and died in the first part of the 6th century. She is thought to have been born to a slave mother and a noble father. Her mother was sold to a Druid landowner, and therefore Brigid grew up alongside the Celts in Ireland. It was during this time as a very young child that she began to demonstrate her generosity, feeding the poorest of the poor and healing the sick.

What are some of her acts that lead to sainthood?

There are numerous legends about the woman, who is sometimes referred to as Brigit, Bridget, or Brigid of Kildare. She performed numerous acts of kindness for the poor. The bulk of these involve providing food or healing as mentioned above. Notably, she is said to have restored sight to a fellow nun. Popularly, she is credited with having changed water into beer for a colony of lepers. This led to her sometimes, jokingly, being referred to as the patron saint of beer.

She founded two monasteries (one for men and one for women) in Kildare along with numerous convents across the Emerald Isle. In addition, she started an art school. She was also thought to have been close friends with St. Patrick, and it was he who heard her final vows before entering a convent.

How is she remembered today?

Her feast day is commemorated in the Catholic Church on February 1. She is often depicted holding a reed cross, a hooked staff, or a lamp. Since she is the patron saint of dairy, fresh bread and butter are staples of the day. Some still leave a loaf of bread and milk or butter outside their door in honor. Many also enjoy a beer in observance of the day as well.

Welcome to our Creative Irish Gifts News Site. We will be telling stories, highlighting holidays and celebrating Irish heritage on a weekly basis with our family of customers. We hope you enjoy reading them and would encourage your thoughts, ideas and your stories on our comment section.